WHAT IS BIM… AND DO I NEED ONE? 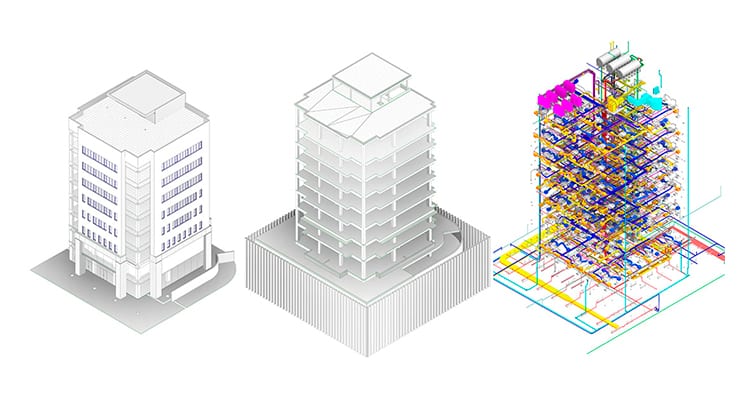 What is BIM… and do I need one?

BIM stands for ‘Building Information Modeling.’ If you are going to hire an architect, you should be familiar with what this means. A common misconception is that it just means 3D model, but it is actualy much more. It is a revolutionarily way to document and deliver projects.

Back in the not so olden days, all architectural drafting was done by hand. You can think of this as analogous to writing a letter by hand. In the 1980s computer aided design or CAD started to become the new standard in architectural practice. These early systems were designed to recreate the hand drawings on the computer. You can think of this as the typewriter; faster, but you are not creating a fundamentally different ‘thing’ than a hand written letter. As computers became more powerful, and the CAD systems more capable, they started to expand on what the architect was able to document. This would be like computer word processing, which still is fundamentally letter writing but is much more powerful and allows for more bells-and-whistles when compared with a typewriter. We are now in the middle of the Building Information Modeling revolution, which – to torture a flawed metaphor – is like the internet, where the fundamental idea of a ‘letter’ is being redefined.

While every project is different and will employ BIM principals to different effects, the basic idea is that you build the project first digitally in the computer before building it in life.

With CAD, the architect draws 2D drawings which represent different views and ‘cuts’ of the building to describe the design to the client and contractor. With BIM, you build an information model that generates these views. The advantage of the latter is that everything is built off a “Single Source of Truth.” With CAD, drawings are not linked, and a change in one place does not affect the other 2D drawings where that change might have an affect. This leads to coordination errors that have to be worked out on site during construction, which can be costly.

When done correctly, a BIM model encounters those same errors first in the computer so they can be worked out during the design phase. The model also keeps track of the quantities of materials and fixtures which further cuts down on scheduling errors and leads to more accurate bidding.

These models then, in turn, serve as a ready device for the architect to communicate the design to the contractor and most importantly, to the client. Many architects are still in the process of transitioning to this new documentation method. If you are interviewing architects, make sure to ask if they employ Building Information Modeling in their practice.

Login to KDA
Reset Password
Enter the username or e-mail you used in your profile. A password reset link will be sent to you by email.